Spinal cord injury (SCI) is a devastating and life changing medical condition that causes paralysis and loss of sensation below the level of the injury.  SCI also has invisible consequences such as loss of ability to control one’s bladder and bowel function and loss of sexual function.

The initial scientific breakthrough came in 2008 when Dr. Zhigang He at Harvard University discovered that deleting the gene phosphatase and tensin homolog (PTEN) enable unprecedented regeneration of connections from the eye to the brain (the optic nerve). Then, in 2010, Dr. He in collaboration with others including Dr. Oswald Steward at University of California, Irvine showed that the same intervention enabled regeneration of axons after spinal cord injury in mice.

PTEN is a master regulator of cell growth during development.  As animals are developing, cell growth is driven by a growth promoting mTOR (mechanistic target of rapamycin) pathway. As animals mature, growth inhibiting genes such as PTEN turn on to block mTOR to prevent cell overgrowth. The unfortunate consequence of growth inhibition in neurons is the loss of ability to regenerate after injury.

So, the trick to enable regeneration after injury is to use gene targeting techniques to knock down PTEN, which releases “the brakes” on mTOR growth pathway, and reinstates a remarkable ability to regenerate.  In the initial study by Dr. He’s team, PTEN knockdown was achieved by deleting the gene entirely.  This was a huge advance in understanding.  Next came the studies to translate this discovery to a potential therapy.

In layman’s terms, knockdown of PTEN releases “the brakes” on mTOR, and reinstates a robust regenerative capacity in the nerve cell’s axon, similar to the growth present in early development. 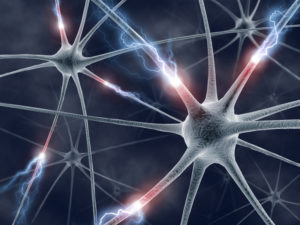 From Basic Science To Candidate Therapy

Following up on the groundbreaking discoveries from Dr. He’s team, Dr. Steward’s team went on to develop a gene targeting technique that could be used in any animal including humans to effectively knock down PTEN in nerve cells in adult brains.  The technique used a viral vector derived from adeno-associated virus (AAV), which was engineered to express a “short hairpin RNA” (shRNA) that selectively targets the expression of PTEN.  When this AAV/shPTEN is injected into the motor cortex, it is taken up by nerve cells that give rise to the corticospinal tract (CST), transforming the nerve cells to a regeneration competent state.

Proof of concept studies then showed that knockdown of PTEN in the motor cortex via AAV vectors  enabled regeneration of CST axons after SCI and enhanced recovery of motor function.  In one study published in the Journal of Neuroscience, rats received injuries at the cervical level, and injections of AAV/shPTEN into one side of the motor cortex. Then they were tested on a task that is similar to what people do when they are eat—the rats had to reach out, pick up a piece of candy with their paw, and bring it to their mouth to eat.  The cervical injuries led to major impairments in this ability. Rats that received AAV/shPTEN and also salmon fibrin into the injury site recovered the ability to use the hand controlled by the side of the cortex that was injected in striking contrast to different control groups that exhibited minimal recovery (Figure 1).

Together, these studies document an approach that provides the blueprint for a human therapy to reverse paralysis after SCI.

The three pictures below show a cross section of a mouse spinal cord that is stained green. The head of the mouse would be to the far right and the tail of the mouse is to the left.

In the middle of the green stained spinal cord is a dark area, which is a spinal cord injury. Corticospinal (CST) axons carry the signal that allows for voluntary movement. In the slides, the corticospinal axons are stained red.

Despite a sustained attempt throughout history, neuroscientists have not been able to make the corticospinal axons grow any further than the depiction in the first slide. The dramatic growth of the CST axons shown in the next two slides had never before been achieved before this research. 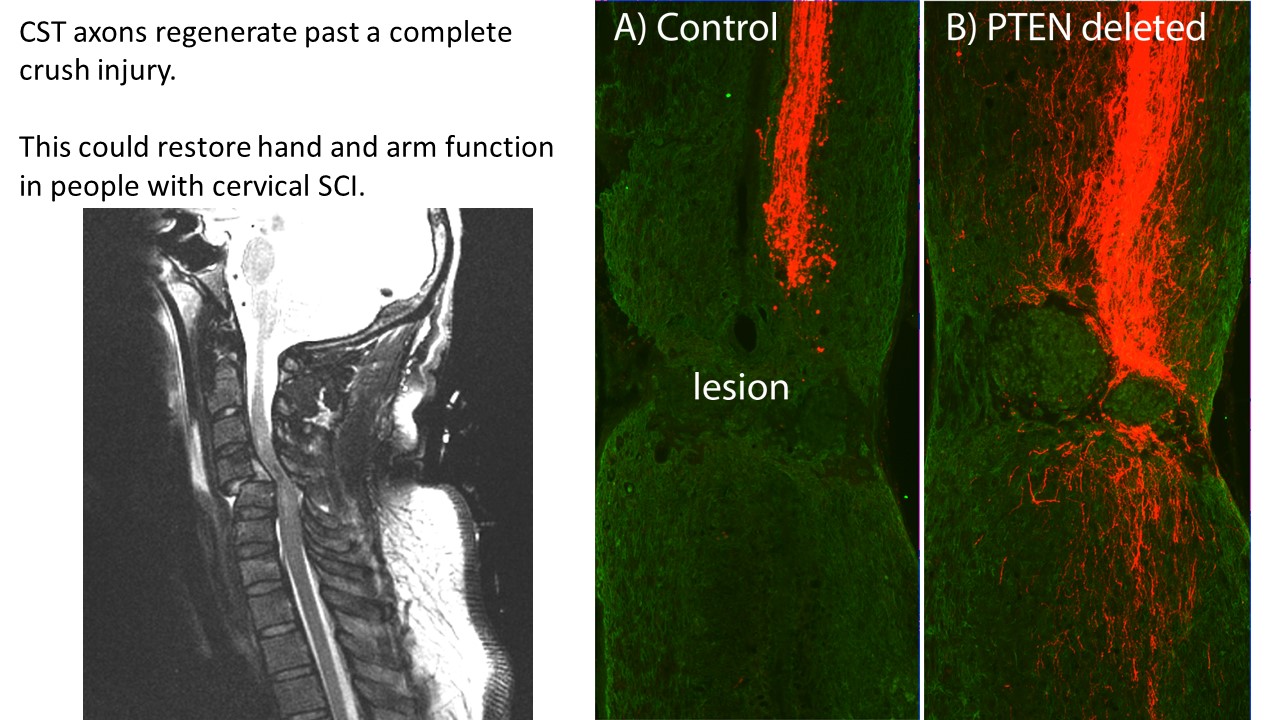 Explanation of Recovery In “Journal Of Neuroscience” Article

This graph illustrates improved recovery of rats that received the candidate therapy (AAVshPTEN injections into the motor cortex).  Rats were trained to reach out, pick up a piece of candy with their paw, and bring it to their mouth to eat.  The graph illustrates how many pellets were successfully retrieved (% success) in treatment groups vs. controls just before and on different days after the spinal cord injury.  All rats were impaired after the injury, but rats that received cortical injections of AAVshPTEN and salmon fibrin at the lesion (red dots) recovered to a success rate that was 95% of the pre-injury rate.  Controls recovered to only around 50% of the pre-injury rate.

The basic findings were then confirmed in a second study published in the journal Experimental Neurology.  This study used the same approach as in the original Nature Neuroscience paper, in which PTEN was deleted by injecting AAV-Cre into one side of the cortex of genetically modified mice.  This time, hand grip strength was measured in a way similar to what might be done in a clinical trial.  Again, the hand controlled by the side of the cortex that received AAV-Cre recovered gripping ability whereas recovery was minimal in mice that received the control vector and un-treated control mice.

This graph illustrates improved recovery of mice with injury to the cervical spinal cord. Those that received AAV/Cre injections into the motor cortex in comparison to controls that were un-treated or that received a control vector (AAV-GFP).